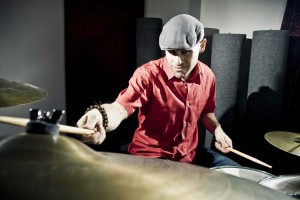 Dan Weiner is a great drummer and a great drum instructor. In addition to a deep, soulful groove (he names Steve Jordan as a major influence), he has superlative hand technique, which may have something to do with his participation as a snare drummer in drum corps (aka marching band) as a youngster. He began playing drums when he was nine.

Despite his impressive credentials and deep experience (more about this below), Dan has a humble and easy going demeanor that gives his students a sense of calmness, confidence and encouragement. Studying with Dan Weiner is like hanging out with a trusted friend who really knows about drums and understands how to impart that knowledge in a structured, organized and efficient way. This, of course, is part of the BANG way….no egos, no judgements, all drumming.

An Integral part of “STOMP” at Age 19

While attending East Carolina University’s School of Music, Dan auditioned and was hired at age 19 to join the cast of the Off-Broadway show “STOMP”. After performing in the New York company, he joined the national tour, eventually playing the lead role and becoming Rehearsal Director. During this tour, he had the opportunity to perform on stage with Bobby McFerrin for the Presidential Millenium Celebration and appeared on several tv shows, including “Good Morning America”, among many others.

He Played Where???? Seriously?

Dan has performed as a drummer at a jaw dropping array of venues including: Madison Square Garden, Town Hall, The Grand Ole Opry, Radio City Music Hall and recently The Continental Airlines Arena for the Wu-Tang Clan.

In the Pit at “WICKED”

In addition to playing in numerous original projects, Dan subs on drums in the orchestra pit for the Broadway show “WICKED” as well as for other theater productions. “WICKED” is known for it’s difficult charts, so if you want to learn to read music, Dan can certainly help you (and it’s OK if you’re a beginner who is not dreaming of playing in an orchestra pit on Broadway).

AND he’s an engineer? And Played with John Patitucci??? C’mon!!!

Also certified as a Pro Tools Operator in Music Production, Dan is an experienced music producer. Most recently he produced (and played drums for) “The Sedaka Sessions”, where he had the honor of working with Neil Sedaka. Lastly, and a personal highlight, Dan was thrilled to play alongside legendary monster bassist John Patitucci (Chick Corea) for a track on “Sharecropper’s Seed”, an album for Word Records/Warner Music recording artist Nicole C. Mullen.