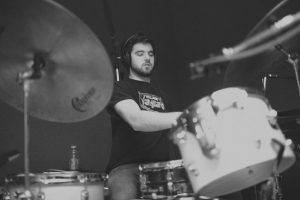 Born and raised in Wisconsin, Daryl played his first professional gig as a drummer at the age of 13.

Not long after that, Daryl found himself performing jazz at NYC’s famed Lincoln Center. His high school jazz band was part of “Essentially Ellington,” a highly prestigious yearly competition and educational program held by Jazz at Lincoln Center, where the best high school jazz bands across the nation compete against each other for the opportunity to play in NYC and study with some of the most important jazz musicians in the world — including Wynton Marsalis. Daryl drummed in the competition, not once–but twice.

Daryl attended the University of Northern Colorado where he studied under Jim White, a renowned drummer and teacher with an impressive list of credits on his resume that includes both jazz and country artists. Under White’s tutelage, Daryl honed his drumming skills.

After graduating from UNC, Daryl moved to Brooklyn to pursue his drumming career.

Daryl can be seen around NYC playing with Drop Diamond (think funky rock/pop) and free-lancing with other artists.

As a teacher, Daryl is enthusiastic, friendly, patient, organized, encouraging and–of course–highly knowledgeable and skilled as a drummer.

Check him out funking out in his practice studio in the video above right.