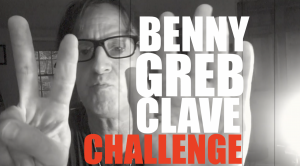 The other day I saw a crazy video on Benny Greb’s Instagram page. He was playing Son Clave by making clicking noises with his mouth. And then he used his voice, while maintaining those clave clicks, to play rhythms based on 3, 5 and 7. All of those rhythms go over the barline. And if that wasn’t enough, Benny issued a challenge to all to try the same thing and post it.

Now, I love a good challenge, so I thought about it a bit and decided I’d give it a try. The difference was I clicked Rumba Clave with my mouth instead of Son Clave. And then I superimposed the same 3’s, 5’s and 7’s on top with my voice.

And yes, I look completely like a crazy person. But it sounds cool. The video is below. And if you want to try it, here is a PDF that has everything written out; Benny’s version (Son Clave) and my version (Rumba Clave). Just click the red text: The Benny Greb Clave Challenge: Notation