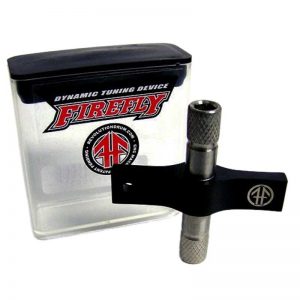 I have to admit, what initially caught my attention was the packaging. A transparent plastic box, a cool looking logo, and a different looking drum key inside.

It was up on the shelf behind the counter at Jack’s Drum Shop on Cape Cod, and I asked, “what’s that?”

So, I was given a little demonstration, and for a mere $10, why not pick up a new drumming related toy to try?

So, I bought one.

Here’s a video that will give you more info on how the Firefly works.

Here’s the deal. What’s actually new about this key is that the handle works as a ratchet. Wind the key in the desired direction, and when you’re ready for another turn in the same direction, just wind the handle back wards and then turn it again.

You don’t have to take the key off the lug every time like with the drum keys you’re used to using. It saves time.

My favorite thing? This key makes things a lot easier when you are on a gig and you need to quickly tweak the tuning but are straining to reach a lug in an awkward place.

The bottom head of a tom-tom that is located on the far side of the drum from where you are sitting is a good example of what I’m talking about here. In this case, you might not even be able to see the lug while you make the adjustment, so having to remove the key and then re-find the lug and then re-secure the key to make an additional turn, all while not being able to see what you’re doing…..what a pain! But with this baby, once you have the key in place on the lug, another turn is easy. Just turn the handle back and you’re ready to go. No need to look!

I like it. It makes things easier. It also looks cool which doesn’t hurt.