I’ve become obsessed with “The Icarus Deception,” by Seth Godin.

Let me tell you why. 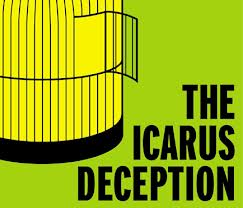 Like “The War of Art” or “Effortless Mastery,” Godin’s book is inspirational and it addresses the creation of art. There is often a battle inside us that prevents us from creating. You know that little voice that tells us we’re a fraud or that we’re not good enough? Godin calls that voice the “Lizard Brain.” We all have it.

But we should all be making art. Creating something unique in any context is art. You don’t have to paint, write, play music or sculpt to be an artist. Entrepreneurs can be artists too. Being an artist means taking the risk of doing something different, regardless of the venue. It also means putting your art out into the world.

“The Icarus Deception” may inspire you to do something different, to create art of some sort, to live up to your potential.

Godin points out that we have been trained by the world, our parents, our friends, and the old industrial economy to settle for less. We’ve been told to be “good,” go to college, and look for a steady job that will allow us to retire and be safe. But guess what?

In the new world that we live in, the post-internet landscape, which Godin aptly refers to as the “connected economy,” what was once safe is actually risky. Staying in a job for twenty years in the hope of the pension and safety is no longer safe. The connection economy creates an environment where great ideas can spread more easily, thus creating great opportunity.

Is it easy? Nope. But is it possible? Yes.

“The Icarus Deception” refers to Greek mythology. The story follows Icarus, the son of famed Athenian craftsman Daedalus. The two were imprisoned on the island of Crete. Daedalus makes wings out of feathers and wax, so that they can fly off of the island and escape.

However, before sending his son on his test flight, Daedalus warns Icarus not to fly too high. If he does, he’ll get too close to the sun and the wax will melt, causing the wings to fall apart.

Of course, Icarus, full of hubris, flies too close to the sun, melting the wax, and winds up plummeting into the ocean to his death.

“The Icarus Deception” is the fallacy that you should heed this tale. Why settle? Why shouldn’t you go after your dreams? The mistake many are making now is to heed this myth and fly too low, settling for a life of corporate drudgery in the hope of being safe. In the connected economy, Godin points out, avoiding the heights of great ambition is a mistake.

In this new world, doing what your parents told you was safe IS NO LONGER SAFE. The safety zone has moved.

This is big news, but many of us have been trained during the entire course of our lives to believe the safety myth. Don’t be fooled. Visualize the life you want and make art if you wish. There is no better time than now.

Very inspiring stuff. There is much more to the book that what I’ve described. Read it.