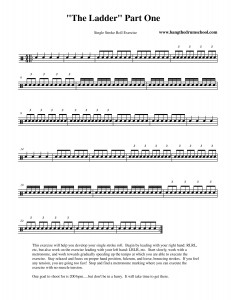 “The Ladder” is a technique building exercise created to help drummers work on the development of the single stroke roll. Download the pdf of this exercise by clicking here: The Ladder Part One

By continually moving up and down the rhythmic ladder, the drummer is forced to speed up and slow down, but all while playing precise rhythmic figures and while still playing in time. I find it an interesting exercise because it also tests one’s control over rhythmic figures that are constantly changing. As drummers, we absolutely must have control over these different figures, so the exercise is helpful on that score in addition to it’s usefulness in developing physical hand technique. The exercise is called “Part One” because it is limited to quarter notes, eighth notes, eighth note triplets and sixteenth notes, while later versions of this exercise will include more “advanced” figures.

The way to get the most use out of this worksheet is to pick a comfortable tempo to begin working and then to continually record your metronome markings as your technical facility improves. Having a log with dates and metronome markings will help you see your progress and keep you motivated.

Technique takes a long time to develop so be patient and keep working hard…..the work WILL result in progress…