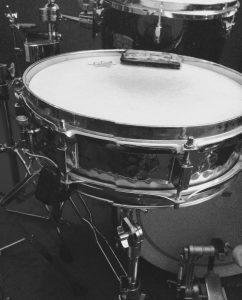 I hesitated to write this because it seems like something that every drummer knows. In fact, every drummer I know who has “been around the block” does know this trick. But then I remembered that when you’re just starting to play drums, there is a world of information that is new. So in that spirit, I present to you, my beginning drummer readers, “The Old Wallet on the Snare Drum Trick.”

If you can’t get your snare drum to sound good, place your wallet on top of it and your problem is instantly solved. It has never failed me.

I usually place my wallet at twelve o’clock on the snare head so it’s out-of-the-way of the “action.” In addition, I will frequently duct tape it to the snare head so it doesn’t bounce around. Yes, you have to try to tune the drum, and yes, the snare wires have to be adjusted to the best of your ability. But if you’ve done all that and your snare still doesn’t sound right, use the wallet trick.