It occurred to me the other day that there is one simple rock fill that I’ve been playing for decades, but I have never heard anyone speak about it.

Nor have I ever seen anyone write about it. 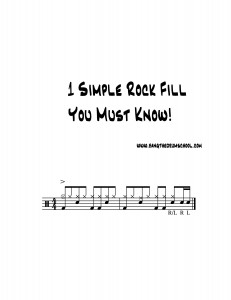 Perhaps it is because rock drummers play this fill almost thoughtlessly, like it’s always been a part of their vocabulary.

Perhaps it’s too easy for anyone to give it any attention.

Over the past few weeks, I have made a point to show this fill to some of my beginner level students. They love it….and here we are, us “experienced” drummers, taking this little ditty for granted.

I would argue that this is one of the first fills a rock drummer should learn. In fact, every drummer with any experience playing rock music has this in their arsenal, I can promise you that.

It’s definitely NOT a show-stopper. And it isn’t supposed to be. In fact, it is the opposite of that. it’s a very simple rhythmic figure that propels the music forward without breaking up the groove.

Here is the PDF: One Simple Rock Fill You Must Know. The fill itself is on beat four of the second measure. It’s just “four-and-ah.” Sticking is indicated.

Put it in your tool box. I am glad to have broken the silence. 😉