What Are Ghost Notes and Why Should You Care?
Ghost notes are simply snare drum strokes/notes that are much lower in volume than your “backbeat” (“2” & “4”) drum stroke. These quieter notes are always tricky to learn, but once you get the different stroke heights into your muscle memory, things will get easier. Ghost notes allow you to add a lot of variety to your grooves. These little “in between” notes which are frequently played on the “e” and “a” are crucial for playing the funky stuff. Usually, beginners play ghost notes way too loud. 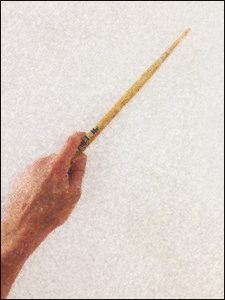 Stick Height = Volume
That’s the formula. Low stick height = low volume and high stick height = high volume. You can also create volume by accelerating and creating more force via speed, but let’s keep things simple for now. If you want to play a low volume note on the snare drum, you simply have to start your stroke from a lower point than you would when playing a louder note. My ghost notes usually start from a height of around 1.5 inches above the snare drum head. This concept is pretty simple, but what really makes things difficult is that you’re alternating your ghost notes with notes that are significantly louder.

The One Simple Secret
Let’s consider the following. As described above, your backbeat notes are going to come from a much greater stick height (often 4 inches or more from the snare head), than your ghost notes. You are also going to alternate between low and high strokes during your playing. Going from low to high is pretty easy. If you make a ghost note and then have to play a backbeat a few sixteenth notes later, it’s not hard to just raise your stick higher using your wrist in anticipation of that louder note.

But the reverse is where people go wrong. The problem I see most frequently with students who are trying to grasp ghost notes is that after their backbeat stroke, they allow the stick to bounce back up to a stick height that is much too high to execute a ghost note from. The simple trick is just this: when you are going to follow your backbeat with a ghost note (not immediately after–that requires a different technique–but perhaps a few sixteenths later), don’t allow the stick to bounce back up. Instead, keep the stick close to the head by tightening up your wrist enough to keep the stick low. By doing this, you’re getting yourself in the ready position for the ghost note immediately.

By mistakenly allowing the stick to bounce up high after a backbeat, beginning drummers then have to try to play a ghost note from a high stick height; and that is very difficult to do (it also violates our formula). It’s a natural mistake–we’re instructed to allow the stick to bounce–but in this specific situation, it doesn’t make any sense. By keeping the stick low after the backbeat, you’re streamlining your mechanics and making your playing much more efficient.

Try it. It works.