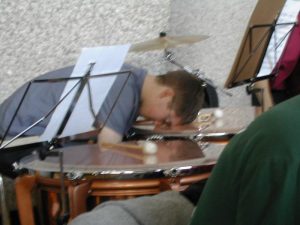 A few weeks back, I had a gig at a Rock club in NYC–called The Cake Shop—with MANCIE. We arrived early with our gear, loaded in, and then went around the corner to a bar to hang out and kill time until the show.

We had some nachos and I ordered a beer. Then I had a second beer. We went back to the Cake Shop and I was going to have a coffee, but I wound up getting an Irish Coffee instead–the bartender was so persuasive!

By this time, I was buzzed. And when we played our set, I hated how I felt. I was stiff, I was in my own head much of the time, and I played it safe…I didn’t go for things that I could have that might have enhanced the music.

When the set was over, I felt that I had merely gotten through it, rather than crushed it, which is how I like to feel.

The only reason for my feeling this way was the alcohol. So, I resolved…never again! I rarely have imbibed before a gig, and this experience reminded me why.

Drinking hurts your performance. Look at some of the effects that alcohol has on you:

That’s the one thing that I’ve consistently heard in defense of drinking prior to a performance.

Aren’t there other ways to relax? I argue that there are.

If you are really serious about being a drummer, consider drinking coffee before your gig instead of a beer. You’ve worked hard to become a good drummer. Why rob yourself of a great performance by drinking before hand? After the gig is a different matter.