One weekday in the middle of the summer, my father, Michael, took me on a little expedition from our apartment in the Chelsea neighborhood of Manhattan, where I grew up, to midtown. I was nine or ten years old.

I was off from school for summer vacation, and so was my father, because he was a teacher in the New York City public school system.

I was drawing a lot back then. I wanted to be a comic book artist when I grew up.

What I didn’t understand then was that the things we did that day and the people we met would have a profound influence on my life. Perhaps one of the most important days in my young years. What was going to happen that day was pure magic.

As I mentioned, we didn’t have an appointment at either place. My Dad just knew I loved drawing, and he knew I loved comic books. So, with no fear, he took my hand, and off we went, to see some people who knew about comic books and how the art work was created.

First stop: Marvel, home of Spiderman, my favorite superhero. I had a big sketchbook with me. We walk in and my Dad walks up to the receptionist and says, “Hi, This is my son, Mark. He wants to be a comic book artist. Is there someone we can talk to?”

The receptionist sees me, sketch book in hand, smiles, and picks up the telephone. A few minutes later, a man comes out to the waiting room, where my Dad and I were sitting on a couch. 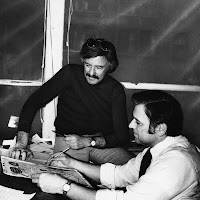 The man approached us. He had short dark hair, parted on the side. Glasses. He wore a button down shirt and grey dress pants. Leather shoes. He was very friendly looking. He smiled as he sat down next to us and said, “Hi, I’m John Romita. What’s your name, young man?”

I think back on this now, and I think,John Romita?! Are you kidding me? How did that happen?! Mr. Romita had a significant run as the artist for “The Amazing Spiderman.” He defined a new look for this landmark character. In fact, he was one of the most important artists to ever draw the comic. He also drew plenty of other great things for Marvel, and was the company’s Art Director as well. This was (is) an important man, and here he was, sitting with me, looking at my drawings.

He looked through my sketch book for a while, with me, asking me questions. I remember him being very warm and encouraging. All the while, my dad was sitting there too.

After a while, Mr Romita said, “Well, Mark, I don’t think we’re ready to hire you just yet, but come back and see us in a few years.” I’m guessing that he gave my Dad a knowing little wink as he said that, but I don’t know if that’s actually what happened.

Wow. We just walked into Marvel Comics without an appointment, and the artist of my favorite all-time comic book looks at my sketchbook. Me—just a kid from NYC who likes to draw. Isn’t that something?
Guess where we went next? Mad Magazine, where we sat in the office of William M Gaines, the founder and publisher of Mad, as well as EC Comics, the controversial horror comic book company. This guy was a real renegade.

I don’t recall much about what we talked about. What I do remember was Gaines’ physical presence was very distinctive. He was BIG. Broad, tall, with glasses and long, flowing, kinky, graying hair and a massive matching beard that engulfed his face. He was like a giant hippy polar bear. 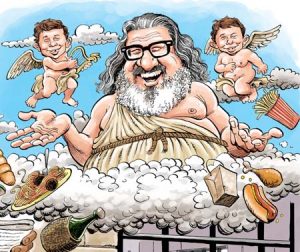 But he was more like a teddy bear. I don’t remember what was said that day in his office, but I do remember that he was friendly, and the meeting felt welcoming.

I am positive that this day helped me to understand that I could do anything I wanted in my life. Ultimately, comic art didn’t turn out to be the thing that drove me, but I learned that anything was possible. You can talk to anyone about anything. People will help you. All you have to do is ask. All you have to do is try. Look at those people. They had vision, they DID things and they achieved great things. I learned that day that I could do great things if I wanted to as well.

And for that lesson, I say thanks to John Romita, thanks to Bill Gaines, and thanks, most of all, to my Dad. Thanks to my Dad for showing me that anything is possible, and that anything you want can be yours. What a wonderful thing to believe.

This is what encouragement is about. It is a major power in people’s lives and I urge you to use it to help people if you can.