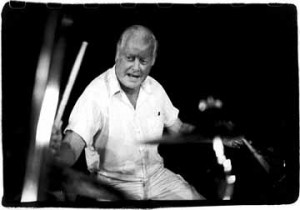 One of the biggest enemies of good hand technique is physical tension. Relaxation is the key to achieving a loose, bouncing and open stroke on the drum set.

I frequently use the phrase “spaghetti arms” to describe how relaxed and loose a drummer’s arms should be. Let your arms hang down at your side—like spaghetti. Cooked spaghetti, that is. I got this analogy from a tennis instructor who helped me improve my serve through the relaxation of my arms. The visual of my arms as spaghetti really helped me.

I’ve noticed that drummers commonly grip their sticks too tightly. In his video on technique, “Speed, Power, Control, Endurance,” Jim Chapin (1919-2009), the author of the classic drum book “Advanced Techniques for the Modern Drummer,” describes a helpful analogy that can solve this problem. That’s Jim in the photo above left.

Chapin describes holding your sticks as you would a baby bird. You want to make sure the bird doesn’t fly away, so you have to wrap your fingers around it. However, you can’t hold too tightly—you must be gentle—or you risk crushing the little bird.

I have used both of these analogies with my students, and many have found them helpful. Just a couple of nuggets for a Sunday afternoon…