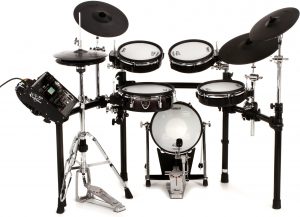 It wasn’t possible for me to really practice on real drums until I had been playing for a few years and my dad helped me buy a drum set. I was probably about 13 when I first started to learn to play drums. When I was 15, my dad, through a friend of my Aunt Jane’s, bought me a second-hand drum set. My Aunt Jane had a loft in NYC’s Chinatown and she allowed me to practice my drums there. This was a game changer. The significance of these two events can not be overstated. It was crucial to my development as a drummer to have a drum set and to have a place to play it where I would not be disturbed nor would I be disturbing others.

The solution of this critical drumming problem is why the sales of electronic drums have exploded.

It’s an easy solution, and it’s easy to say “yes” to electronic drums. You have a set up that closely resembles the spatial relationship of a real drum set. They are relatively quiet. Sound-wise, playing them is similar to playing on a practice pad or set of practice pads. And finally, you have the deal closer: it actually sounds like you’re playing on real drums. The digital sounds in most of the kits are so good that you can live the fantasy of real drum set playing. When it sounds that good, it’s easy to want to play more.

These sonics may help some practice more. Practicing on a pad can get boring. Less so on the electronic kit because of the sounds. This, in general, is a good thing for drumming. Anything that stimulates more practice is a positive.

However, the electronic drum set does present some problems that are significant.

The first issue is what I call “distracted practice.” Technical practice requires focus. The electronic drum kit can distract from the required focus. When I was kid and spent a few years working on a pad, I worked very hard on my hand technique. My strokes, rolls, paradiddles, flams and the like were given priority. It made sense because there was nothing to distract me. I couldn’t hear any drum sounds and I had no drum set. What else was there to do but work on technique, reading and some rudimentary independence skills? Nothing really. So I got to focus on technique.

In my years as a teacher, I have found that technique is the big eliminator. If you don’t develop technique, you are precluded from being able to play at a high level. Most beginners don’t get that far because they don’t have the patience, focus or drive to spend the time doing the work that allows the development of a great double stroke roll or other similarly difficult technical drumming skills. Electronic drum sets make it easy to get distracted from that technical practice work.

This distraction problem as it relates to technical work and practice exists on real drums too. That’s why I frequently force myself to sit with just a pad or just a snare drum when I’m working on my hands. The same thinking will get me to sit behind a drum set without any sticks at all when I want to work on my foot technique.

Besides the “distraction problem,” there is the issue of “touch,” which, by the way, is the other big “eliminator” in drumming. It is very important to practice on a real drum set in order to really get good and in order to gain that volume control and “touch.” The relationship between the velocity and weight of a stroke and the volume and tone of a sound produced is very different on a real acoustic drum set. Those subtleties are mostly lost on the electronic drum kit.

Here’s a story to illustrate that. It comes from a personal failure of mine, so it’s painful to tell, but the story is important and I want others to learn from it, so I will share it with you. When I was re-entering the drumming world from the land of corporate business, I landed an audition with an artist on Columbia Records. I knew this artists’ work and I really wanted to play with him.

At the time that I secured this audition, I had just left my corporate job and I did not have a dedicated place to practice on real drums. However, I had a gorgeous Roland TD-20 V-Drum kit (by the way, Roland V-Drums are my recommendation for those of you who are in the market for a set of electronic drums). So, I figured I would just practice my ass off on the Roland kit and go to the audition. What a mistake that was.

I went to the audition and in some ways I played great. I knew the songs very well and I knew what I wanted to play. And I executed that. However, I played too loud! The artist was a singer/songwriter and the vibe was a little more laid back. The volume on the drums needed to be dialed down. Not a rock vibe. More Jackson Browne than Blondie. And when I realized I was playing too loud, I didn’t really have the technical flexibility to dial it back appropriately.

The practice on the electronic drums screwed up my volume control on real drums. The relationship between the strokes and the sound produced was so significantly different that I could not get a handle on it quickly enough to make the proper changes because I’d spent so much time practicing on the electronic kit. My muscle memory was to make bigger motions because the electronic drum kit allowed that without the increase in volume that those strokes would create on real drums. I didn’t get the gig and that sucked.

But I learned a valuable lesson. I never practice on electronic drums anymore. It’s all acoustic all the time for me. And for those of you who are saying “yeah, but Mark, I don’t have a place to play real drums, I live in an apartment, so I have no choice,” get over it! Go figure it out. If you’re serious about playing drums, you will figure out a way to go somewhere and play on real drums with regularity. It’s crucial that you do.

So, do I think electronic drums have a place? Yes, I do. I think it’s a great tool for beginners to get started and get excited about drumming. It can also be useful for intermediate and advanced players seeking to work on independence or coordination ideas.

But be forewarned! Don’t get lazy and think that you can substitute electronics for the real thing. You can not.