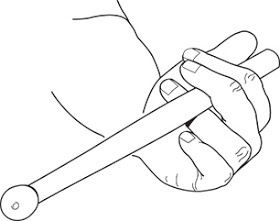 Have you noticed that a lot of prominent players are moving away from traditional grip? Recently I’ve read interviews where Dave Weckl and Steve Smith each mention they are using matched grip more than they used to. Thomas Lang has gone so far as to say that Traditional Grip is “a curse.”

Much of what I’ve read indicates that the main issue these players have is one of power.

More specifically, the awkwardness of the grip when powerful backbeats are needed can cause injury.

And I agree. This is my complaint with the grip. You simply can not gracefully get the same power on the drum kit with Traditional Grip.

But I still continue to use Traditional Grip in a significant amount of my playing because I’ve developed so much facility that way. But I understand why Lang feels the way he does. The reason the grip has continued to be used is part and parcel in the name itself. Tradition has created a lineage that gets followed despite the needs of modern playing.

And the history, which is the primary reason that Traditional Grip persists, does not account for the change in style of music and the greater need for power that the prevalence of rock and pop drumming requires.

To explain this, let me tell you about how and why I made decisions on hand grips up until now. When I first started playing drums, my primary drumming role models were John Bonham, Neil Peart and Peter Criss.

They all played Matched Grip and so I learned by imitating. For many years I played only Matched Grip.

Later, I discovered the virtuosic playing of Gadd, Colaiuta, Weckl, Williams and Rich. I became obsessed with acquiring more technique. I asked myself, “If all of the greatest drummer technicians play Traditional Grip, shouldn’t I?”

The answer was a resounding “yes.” In fact, it was a no brainer. I did not need to know anything other than the fact that Steve Gadd, Vinnie Colaiuta, Dave Weckl, Tony Williams and Buddy Rich all primarily used that grip. No knowledgeable drummer would argue about these being among the greatest hand technicians in the history of the instrument.

Now, let’s explore some more drumming history. In all likelihood, the drummers named above chose their grip preferences for the very same reasons that I did! Their drumming idols used Traditional Grip and they were just mimicking them. But most of their idols were jazz drummers. That has been documented in many interviews with these giants.

What makes all of this somewhat ludicrous is that the only reason Traditional Grip even exists—and now we’re going back even earlier in history—has to do with drummers marching in the military.

When the earliest marching snare drummers played, they created Traditional Grip. Like many new ideas, necessity became the mother of invention. The way the snare drum hung off of the marching drummer’s body resulted in a downward slanting playing surface. Matched Grip would simply not be practical in this situation. Hence, the birth of Traditional Grip.

And that invention had been passed down through a long lineage of drummers, including myself and many of you, simply because a significant number of prominent drummers became incredibly good at using that grip.

That doesn’t mean that the grip always makes sense in today’s musical environment.

In the new millennium, a versatile drummer will sometimes require power to play appropriately for a particular genre.

Don’t get me wrong, I’ve had a long love affair with Traditional Grip, and some of my chops are superior using that method. But it makes sense to me to have one method that can do it all, and I believe that Matched Grip may ultimately be that way.

The journey is never ending.