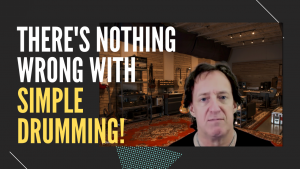 As I get deeper and deeper into the video course that I’ve been creating for beginners, I’ve  been reminded of quite a few things.

One is that even though it’s almost a cliche at this point, the notion of “focusing on the groove” and “playing for the song” really is of the utmost importance.  Truly.  I mean, I’ve always known that, but it took me many years to fully implement the idea into my drumming life and really, deeply understand and believe it.

And the reason that I now fully believe it at the core of my being is simple.

The more I play this way when I play with people, the more I get hired and the more money I make.

Not to mention the fact that I have gotten some over-the-top kind of compliments about my playing that I kind of can’t believe.  You know what I mean about “not believing” it?  That little negative part of my brain thinks, “Jeez, don’t listen to that, they don’t know what they’re talking about,” or “They don’t really mean that. They’re just being nice.”

I hope this doesn’t sound arrogant; I do think what I’m saying could be perceived that way. But, I am honestly just telling you about some things that have started happening in my drumming life since I’ve applied these principles in a deep and meaningful way.

I considered not making the video I’m going to share with you today.  Mostly because of the fact that “play for the song” and “it’s all about the groove” are repeated so frequently by drummers as to have diminished the power and truth of these statements.

But also because the video shows me playing a song very simply. No fancy fills or pyro-technics. I’m just laying it down with a simple eighth note groove.

And then I thought; so what? Does that simplicity make it “bad drumming?” Is its value less than some chops-based odd-time signature progressive rock masterpiece?

The answer is a resounding “no!”

It’s value is clear. The reaction I get when I play that way is dramatic.

And so, the results that I’ve seen in my own life have made me want to put this out there, regardless of what a fusion-loving drummer might think.

Ah, it feels good to shout that!

I also had another reason for moving forward and publishing this post and video. You know what it is? The current online world needs to hear this!

The social media dominated cybersphere puts pressure on musicians (and drummers in particular) to be chops heavy and play complex things in a massive game of one-upmanship.

I think to a certain degree that this online social media environment impacts the choices that drummers make in their playing. And that’s a bad thing.  Because the real world, where you play with other musicians and make music as an ensemble, doesn’t necessarily reward chops all day every day (although it does when those chops are musically appropriate for the situation at hand).

But it needed to be said. Below is a video I made where I discuss this concept briefly and then play-along with a song by MANCIE (a rock band that my wife, Andrea founded and that I am now the drummer for) that demonstrates the notion.

So remember: there is nothing wrong with simple drumming!  In fact, it will get you more gigs and probably make you more money.