Alright everyone. Here’s my top ten. I’m guessing this may spark some debate, and think that’s fine, so feel free to let me know your thoughts. 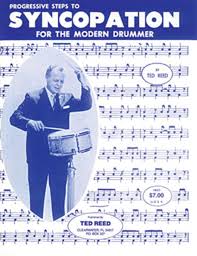 Syncopation
This book, written by Ted Reed, is very versatile. I use it with beginners to teach them to read rhythmic notation, but it has many other applications for intermediate and advanced drummers. “Syncopation” starts at the beginning of the world of reading and has exercises that are appropriate for beginners who need to learn the basic rhythmic figures in somewhat simple and easy exercises.

The section on quarter notes is a bit lengthy for my taste, but you can move on from quarter notes after the first two pages and continue on to the eighth notes section without missing anything. The sections on eighths, triplets and sixteenths are great as an introduction to those figures because the exercises are very linear and therefore easy to follow.

“Syncopation” progresses and gets more difficult, but I’ve always thought it was the perfect introduction to reading for beginners. A must. 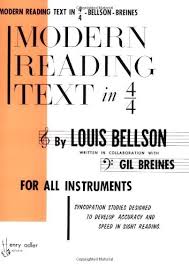 Modern Reading Text in 4/4
Once at student has gotten through “Syncopation,” the next reading text I like to use is “Modern Reading Text in 4/4.” Written by the late drumming giant Louis Bellson, “4/4” is more advanced and gets deeper into the possibilities of reading rhythmic notation. There are some pages in the book where things are written in ways that you would never see in real life; Bellson sometimes tries to trick you. But that’s OK–we’re trying to learn here.

There are rests all over the place, every sixteenth note and triplet partial you could possibly imagine, dotted notes galore, and never-ending ties. There are even syncopation exercises that mix all sorts of different rhythms. But no worries–you (or your students) will be ready because of those trusty syncopated exercises in Mr. Reed’s book.

The only criticism I have of this book is that it’s light on the 16th note triplet and 32nd note fronts. 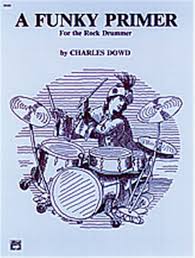 The Funky Primer
I have a love/hate relationship with this book, but there are certain things about it that you just can’t beat. For example, the first coordination section, on eighth note bass drum variations, is the best out there, period. Those two pages of 36 exercises cover most of the possibilities of bass drum placement on the eighth note grid and include many exercises where the bass drum lines up with the snare drum. This is an important skill that most rock independence books mysteriously ignore. “The Funky Primer” is worth the price of admission just for these two pages, but the sixteenth note sections are good too.

My problem with “The Funky Primer” is that often it is not musical. Many of the exercises are decidely lame sounding beats that nobody would ever actually play in real life. Like ever.

But, if you need to teach someone how to play eighth notes with their cymbal hand while maintaining two and four on the snare drum AND varying the bass drum, this is very good place to begin. Possibly the best. 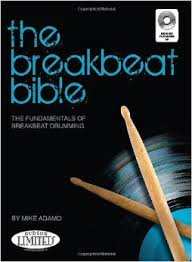 The Breakbeat Bible
This book is a fantastic follow-up to the “primer” mostly because it solves the musicality problem. Pretty much every groove in the book is something you would really play on a gig. Lots of hip, musical patterns and grooves, and many transcriptions of great funk players are included.

Once a beginner has some decent control with coordination through the “Primer,” “Breakbeat” will help give them a better understanding of all the other possibilities that exist in playing grooves.

I dig it. And the students usually recognize that the beats are on the bad-ass side. 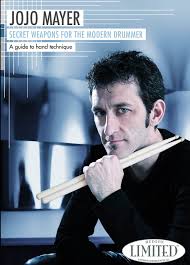 Secret Weapons for the Modern Drummer
When it comes to technique, it’s pretty clear that this is the document to go to. I agree with Jojo’s teachings. They’re in line with everything I’ve learned from knowledgeable drum instructors and watching my heroes.

You’ll note that this is the first video on this list. I love me my drum books, but a book can’t show you what a stroke really looks like. Only a video can do that. The problem in the world of video is that the internet is full of crappy teachers. Anyone can post anything but beginners may not know how to separate the charlatan drummers from the ones who offer useful and correct information. And that is where “Secret Weapons” comes in. You can trust that Jojo is showing you the right stuff.

From the very beginning of the basics of the stroke, to the super advanced insane push/pull techniques, this video has everything. If you want to see what the wrist movement or grips or bouncing the stick looks like, watch Jojo. He explains everything very clearly and the quality of the video is fabulous.

It’s also a document that will help the drummer as he develops. The Moeller section is very strong–Jojo has a way of explaining the movements that is very precise and clear–it’s unlike any other explanation I’ve ever seen. And it works–I’ve used it successfully with students. Essential. 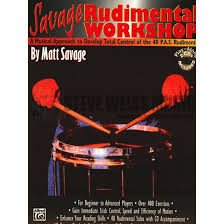 Savage Rudimental Workshop
This is my favorite book for introducing the rudiments to a beginning drum student. It’s the only book I’ve ever seen that breaks things down in the detailed way that Savage has devised. It’s not that revolutionary an idea, but Matt Savage is the only drummer/educator who takes each rudiment and breaks it down into the smallest possible pieces.

Each chapter is about one rudiment and one rudiment only. Savage begins with a few pages of exercises to develop the specific rudiment and then follows that with a written snare drum piece that is only based on the rudiment in question.

So, there’s solo based on singles, one based on doubles, one on paradiddles, flams etc. 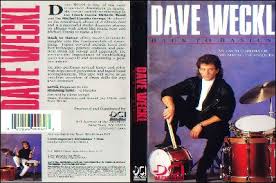 Back to Basics
This is the first educational video released by Dave Weckl and although he’s changed his technique significantly since this originally came out in 1988, Weckl talks about the basics of technique and break things down very well. The most important thing here in my opinion is the foot technique section. Dave shows his bass drum double stroke technique here and I’ve yet to see what I call the “front/back” (sometimes called the “slide”) doubles technique explained or demonstrated in any other video. Sure, the video is old and the music is outdated, but the bass drum doubles instruction is on the money.

It doesn’t hurt to see Weckl’s soloing here either. It’s beyond the reach of beginners, but inspiration is always a good thing, and showing a beginner some of the possibilities in Dave’s solos might excite someone new to drumming. 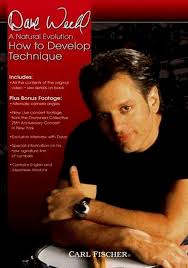 How to Develop Technique
This video, one of three Dave made in his “Evolution” series for Carl Fischer, explores Dave’s new, revamped approach. He made some big changes while studying with Freddy Gruber and he shows a more open, loose and natural technique here as a result.

The video will be helpful for the demonstration of technique and the explanation of the new approach.

BUT the biggest reason I like “How to Develop Technique” is the section on doubles and Dave’s new technique for playing the double stroke roll. When I saw this, I adapted it myself and it revolutionized my doubles technique. Doubles are the hardest of all hand techniques to learn and the nuances of what Dave demonstrates in the video are priceless. Just the doubles section is worth the price of admission. I’ve never seen it explained that way in any other drum video. A must. 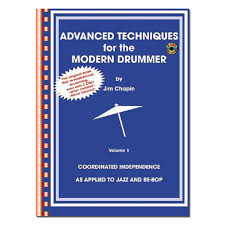 Advanced Techniques for the Modern Drummer
This classic by Jim Chapin is still required for any beginner who wants to learn to play jazz. As a beginner, the hardest thing in the world, it seemed to me, was to be able to play this varied cymbal pattern and then be able to play other things against it. Surely, this was impossible!

But Chapin breaks it down into little chunks that allow this independence to be learned. What a delight it is to hear a student begin to play jazz as you progress through this book. Yes, the book is dated, and the notation is weird and needs explaining–you have to translate the dotted eighth/sixteenth figures into triplets for it to make sense–but besides that, you can’t go wrong with this book. 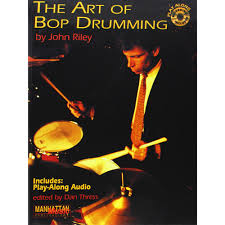 The Art of Bop Drumming
John Riley picks up where Chapin leaves off in this now-classic introduction to jazz drumming. Riley goes deeper into the ride cymbal pattern and how to develop the right sound and feeling when playing it. There are comping exercises that are very musical. There is a lot of great soloing vocabulary and phrases that you can cop in order to sound competent right away.

Pretty much everything that a beginner needs in order to get going is in here. It’s a perfect book to use in conjunction with Chapin for jazz beginners.