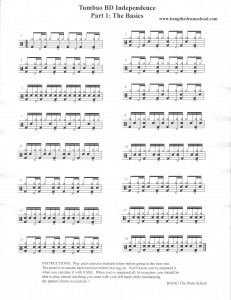 The Tumbao bass drum pattern is a common figure, frequenty played by the drummer to match the rhythm of the bassist when playing Latin music. In this version of the pattern the bass drum plays on beat one, the “a” of beat one and on the “and” of beat two. The pattern repeats again on beat three (as you’ll see on the sheet). Another common way to play the rhythm is to omit beat one, as the bass player frequently does in this music. Having independence with your hands while your foot maintains this bass drum pattern is an important skill to have in your tool box if you are pursuing playing playing jazz in a modern setting. I was inspired to work on this after hearing Vinnie Colaiuta play this while playing with Chick Corea.

The method is completely logical, as you will see by looking at the worksheet that is attached. You can download the worksheet by clicking on the link here: Tumbao Independence Part One

The method is to maintain a common ride pattern with the right hand (here, the jazz ride cymbal pattern in a sixteenth note form), while systematically working through the common possibilities with your left hand.

Try it out….it’s hard work, but the pay off is big. A little further down the road, I’ll post some of the musical patterns you can play off the top of your head once you’ve locked down this independence concept.

Have fun, and please feel free to comment or ask questions.