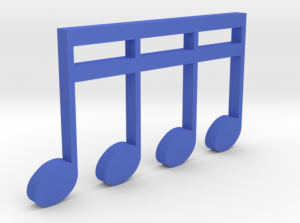 I frequently have students ask me about sixteenth notes. How do they work? How do I count them? What do they look like? And more.

The worksheet I’ve included here is not exhaustive. It doesn’t cover every single permutation of sixteenth notes. However, it does cover the figures that beginners see most often. The less common figures will be covered in Part 2.

The PDF is here for you to download and print out: Understanding 16th Notes Part 1

Let me explain the worksheet, top to bottom.

The text above each measure indicates the counting mnemonic that should be used.

For quarter notes, simply say the number of the beat for each note (“One” “Two” “Three” “Four”).

For eighth notes, each additional note (now there are eight instead of four) has the mnemonic “And.” This is often written as a plus sign (“+”), but I’ve written out the word “and” because that is the syllable that you actually say when counting.

Sixteenth notes fit four notes into the space that you initially fit either one note (quarter notes) or two notes (eighth notes) into. The mnemonic for counting them is:

It’s a simple system that you need to burn into your memory banks. The counting will guide you so that you know where you are in the time and it will help you play more difficult rhythms.

The next set of two measures shows you how the sixteenth note grid lines up with a single sixteenth note in any of the four possible positions (ie. the number, the “e,” the “and” or the “a”) in the group of four. The graphic and dotted lines should help you understand where each note is placed and how it is counted.

Finally, the last two measures explain four of the more common sixteenth note figures. These are the figures that include three of the four notes in a group of four sixteenths. There are four possibilities here and each of them is notated in each successive position on the final measure of this worksheet.

I’ve found that beginners often find it helpful to think of these rhythms in terms of what is “subtracted” from the group of four sixteenths. For example, the first figure on the left of the last measure is a group of four sixteenths with the “a” sliced off. The next figure has the “and” missing, while the third figure has the “e” missing and the last figure on the right has the numbered note missing.

Counting mnemonics are included as well.

I’m going to make a video for this post soon, but for now, I think that this worksheet should be helpful.

Let me know what you think: feel free to ask any questions in the comments section.