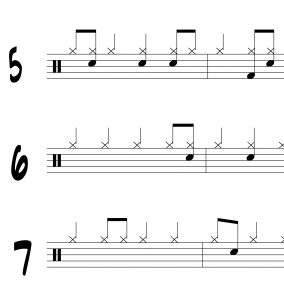 When working on playing authentically in any musical style, one fail-safe approach is to begin by absorbing the playing of your favorite drummers. Transcribe what you like, practice it, absorb it and then use it freely. Once you can do that, alter the ideas to make them your own.

For these two pages of exercises, I’ve started from transcriptions of Williams and Gadd (it’s well documented that Gadd was heavily influenced by Tony) and then taken liberties to make them more applicable for mere mortals. For example, I’ve decided not to include five notes in a row on the ride cymbal because of the technical difficulty of those phrases for those of us with somewhat less than Tony-level ride cymbal technique.

You’ll notice that the 16 exercises are all four measures long–which is kind of how one needs to think at these faster tempos (240 bpm plus).

You’ll also notice that the cymbal patterns are broken and varied. That’s because I wanted these exercises to help me and you with a more modern/contemporary style of playing.

Here’s the link so you can download the PDF: Uptempo Jazz Comping One