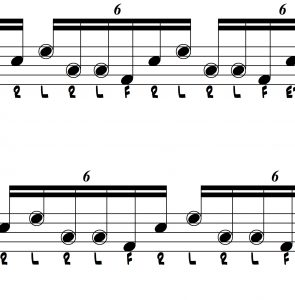 After some experimenting with Nasty Lick #80, I came up with some variations I really liked. They are all included here, on the attached PDF. You’ll find three examples on the worksheet, as described below.

The first example is simply taking the core of #80 and repeating it for one full measure. Second is a variation for a two beat fill. The last example shows how I used the idea in a solo with my new band, LEVEL5.

This drum feature section includes a lot of “hits” played by the band with space for me to solo in between them. I’ve included a four measure section that shows the rhythms that the band is playing (the “rhythm cues,” shown above the drum notation) and the complete drum notation of what I play in that section below that.

I really wanted to use this idea there, and you’ll see how it fits in between the hits when you check out the PDF, which you can find at this link: Variations on Nasty Lick 80. This stuff sounds killer…check it out!