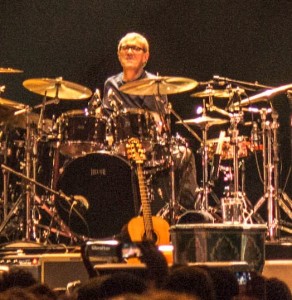 There’s been much speculation about Mr. Colaiuta’s gear since his short-lived association with Ludwig Drums. The drum geeks of the world were looking to see what Vinnie would be playing when he went on the road with Sting this year. The wait is over. The answer is Heuer.

You can read about Chris Heuer’s drums at his website: www.heuersdrumlab.com

Although this may come as a bit of a surprise to many, Chris has gained a reputation for doing top-notch restoration, customization and repair work for many of Los Angeles’ top drummers for a while now. Apparently, he builds custom drums too. Good ones. Really good ones.

A quick look at Vinnie’s website shows that the empty grey space next to the Paiste logo on the “links” page has been replaced with the Heuer logo. Check it: www.vinniecolaiuta.com/home/links

In addition, check out the photo, above, of VC playing Heuers on the Sting tour.

It looks like Heuer’s business is about to take off.