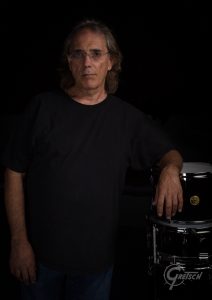 Vinnie Colaiuta has returned to Gretsch Drums. An announcement was posted on Facebook and on Gretsch’s blog on June 6th, 2016:

We are proud to announce that legendary drummer Vinnie Colaiuta has come home to Gretsch Drums. Without question, Vinnie is one of the world’s most respected and admired drummers. Throughout his prolific, 4-decade career, his artistry has inspired and entertained legions of drummers and music fans alike. Vinnie will be taking his newly redesigned, Gretsch USA Custom Kit finished in a one-of-a-kind Cobalt Blue Lacquer with Vinnie Colaiuta signature badges out on the road with Sting on his upcoming, 19-city “Rock Paper Scissors” tour with Peter Gabriel which kicks off June 21st in Columbus, Ohio. Welcome home, Vinnie.

The familiar Gretsch logo is again prominently featured in the “links” section of Vinnie’s website, which had recently featured the Heuer Drums logo, and prior to that, the Ludwig logo.

On his return to Gretsch, Colaiuta said: “I was in free fall and I made a soft landing. My sound is Gretsch. Home is where the heart is. I came back home.”

Vinnie has bounced around a bit with his endorsements in recent years, leaving Gretsch and Zildjian for Ludwig and Paiste respectively in early 2012. He then left Ludwig in late 2013. Vinnie played Yamaha for much of his early career.

Gretsch also posted a video of Vinnie opening the boxes containing his new cobalt blue USA Custom kit. Check it out below.