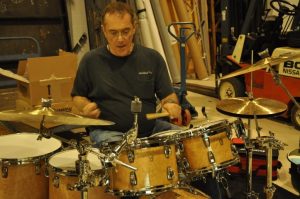 You know if you read this blog that I rarely post about this kind of thing. But, seriously, this is pretty big news. Legendary drummer Vinnie Colaiuta, arguably one of the greatest drummers alive, has moved from Gretsch Drums to Ludwig and from Zildjian Cymbals to Paiste.

At first, I did not believe it. I thought it was some sort of April Fool’s joke. But I checked out Ludwig’s Facebook page and they posted a photo of Vinnie playing Ludwig drums (see photo, above left) with the caption, “welcome home.” Then I went to Vinnie’s website and looked at the link section. The Ludwig and Paiste logos are displayed on that page (see the link here: Vinnie’s Website: Links Page)