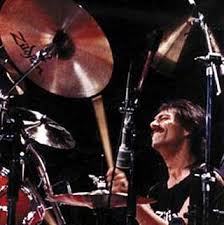 I’ve recently been listening to Jeff Beck’s “Performing This Week: Live at Ronnie Scott’s,” featuring Vinnie Colaiuta. I’ve always loved “Led Boots,” from the “Wired” album, and Vinnie doesn’t disappoint on the live version.  “Led Boots (Live)” is a great example of how to approach adding your own voice to a song that fans already really know.  You have to respect the original–you don’t want to disappoint the fans.  But you want to play it your way too.  Vinnie references the original, and keeps some key moments the same, but he adds his own touch.

The studio version of “Led Boots” featured Narada Michael Walden on drums and his original drum intro is one great example of rhythmic displacement, which has become much more popular since.  Vinnie pays homage to this in his version.  Check it out.