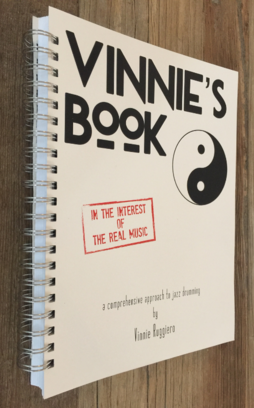 Vinnie Ruggiero is a cult figure in the drumming community. His playing was muscular and aggressive and grooved like crazy. Let’s not mince words–Vinnie Ruggiero was a motherfucker. I was introduced to his playing and teaching by one of my drum teachers, Rick Considine, who hails from Rochester, which is also where Ruggiero eventually settled. Rick was a student of Vinnie’s and as such, he had collected a bunch of his teaching materials.

These photocopied pages, which Ruggiero frequently gave his students, were part of the jazz drumming book he was working on called “The Book.” Rick shared a good amount of the pages in his collection with me. I found the material to be instructive, musical and inspiring.

When I heard that “The Book” was to be published, I pre-ordered a copy immediately. If you are serious about playing jazz, you should too. It’s 250 pages of material and called “Vinnie’s Book.”

I urge you to buy a copy. Here’s the link to purchase: Buy Vinnie’s Book Here