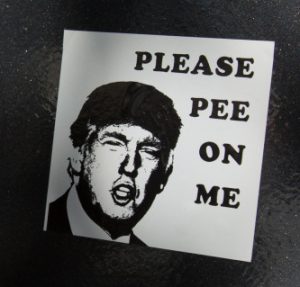 I saw this sticker while out running and it made me laugh out loud. Thank you to whoever made this.

This article is going to get me some backlash. And I need to preface this by making it clear that I am saddened, shocked, distraught, disoriented and angered by Trump’s election to the highest political office in our great country. I also have to warn you that I am going to curse in this article. I’m upset, so be forewarned.

BUT, he did something right in his quest to get elected.

He did it DIFFERENTLY. In fact, it’s pretty clear that his behavior, message and the way he delivered his message was unlike anything we’ve seen before in American politics. He did not give a shit about what anyone thought.

Trump did it his way. He was so shockingly different and brash that his win was deemed as a massive upset. I would argue it was this shocking difference, fearlessness and perseverance that led to his win. Remember that the media predicted his most certain demise. But Trump did not care….he never gave up. He persevered.

So, artists! You don’t have to like Trump. Most of us don’t. But his newness, his brashness, his shocking way of not giving a flying fuck IS something to consider when you make your art. It worked for Trump in his election, and if you think about it, that way of thinking differently is what makes for revolutionary art and creativity.

So, that’s the take away for artists. Whatever your medium, be it painting, acting, comedy, writing, sculpting or music or DRUMMING…etc…. Be fearless. Be different. Be confident. Care not what others think. Persevere.

It’s still America, Trump or no Trump. And we have the power of freedom of speech. Use it freely in your art. Do it differently and you might succeed. That’s what we artists can learn from The Donald. I give it up to him for that.

Besides that, he can fuck off.