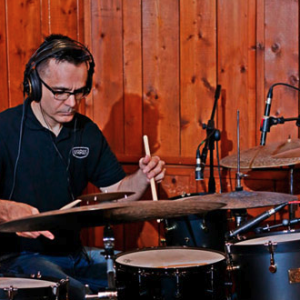 Have you ever felt that certain hand techniques might be unobtainable?

I remember watching Jojo Mayer’s first DVD and thinking some of the super-advanced techniques he demonstrated might take so much practice to master that it might not be worth the work.

The one exception was the push-pull technique. I thought that it would be incredibly useful to master. There is so much you can do with it. Even if you only mastered it with your cymbal hand, imagine what that could add to your grooves.

But master it with BOTH hands, and you could create a roll that would be incredibly fast!

I’ve been messing around with push-pull for years, but I never fully committed myself to mastering it–until now.

Jojo’s section on this one technique is pretty short. I’ve watched it over and over again. But I could never get it as fast as he could do it. I never felt that I had all the information I needed to really get there.

Over the past few years, I’ve become familiar with drummer Yoni Madar. His technique is superb and push-pull (he calls it “open-close”) is one of the techniques in his arsenal.

Recently, Yoni released what I believe is his first instructional video. It’s available on his website: https://www.madardrum.com/

It’s an in-depth series on the “open-close” technique, aka “push-pull.” It features four lessons and clocks in at almost three hours.

Yoni speaks Israeli in the video but there are English subtitles that are very clear. I didn’t find the language was a barrier to learning.

The production quality is good. But the best part is that Yoni really explains and demonstrates the technique in great detail. He talks about and demonstrates how to develop it step by step. In fact, there is so much information here that I finally feel, having watched it, that I know how to get this technique together. And I have begun that process in earnest. I’ve committed to mastering it.

I have to recommend Yoni’s “open-close” video series because it’s the most detailed teaching of this technique that I’ve ever seen.

You can purchase it on his website and it’s just $44.90 as of this writing.

In addition to “push-pull,” there are some very useful other tricks that Yoni teaches in the video. If you want to learn how to play the modern jazz ride cymbal 5 note grouping (a la Tony Williams), you’ll get the information and instruction to be able to do that at blazing speed in the lessons. Yoni calls it the “Fast Five,” and when he demonstrates it, you’ll see why. He crushes it and shows you how to do it too.

I’m not going to reveal any other details because I believe you should check it out for yourself.

Madar does not hold back. He gives you the info. So, if you’ve wanted to learn push-pull, you now have no excuse not to.