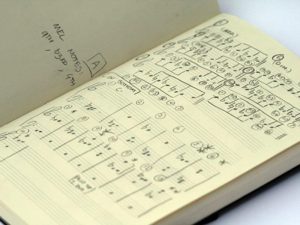 If you’re serious about drumming–really serious–you’ll be driven to figure out how play drumming that excites you. Transcribing is the usual way to do this. And transcribing is easier than ever because current technology allows you to quickly slow down recordings and videos.

Your ultimate goal, however, should be to sound unique. That’s the “holy grail.”

On your way to achieving this, you’ll learn other people’s ideas, licks, solos and grooves.

Writing it all down is very important.

Right now I’m compiling my best stuff into a book so I can focus on bringing it out when I play. I want that vocabulary to be at my command with ease. No more forgetting cool stuff after I’ve come up with it. After all, if you come up with great stuff and you don’t have command of it or can’t recall it, what’s the point?

In one of my lessons with John Riley, we discussed this. One example was Philly Joe Jones. If you’ve listened to PJJ, you’ll know that his soloing style was very unique. No one sounded like him. He was instantly recognizable.

Did you know that he had a notebook of his stuff compiled? Well, he did. I found that ironic because Jones struggled with heroin. One would not necessarily think that a heroin addict would be so organized. But he was. That speaks to the importance of compiling your vocabulary.

I believe that being organized about your vocabulary–writing your ideas down and later distilling them into a book of your “approved” ideas–can make a big difference in your practicing and playing.

I’ve put this notebook off for a while. There are tons of notebooks on my shelf that document the journey, but I need one notebook that puts all the best stuff that I want to use in one place so that I can recall and play it at will.

I’m going to get this done.

And it’s something that I suggest you at least consider doing.

If you’re interested in more on this, here’s a short video I made on the topic: